The 2021 #FrenchGP weekend has provided thrills, spills, and ever-changing weather. As the MotoGP grid formed, it was clear to see that rain was on the way. However, the beginning of the race was declared dry, this meant that should the rain start once the race was underway, the rider would be allowed to come in and swap to their number 2 bike with a wet weather setting once the white flag had been shown.

The pressure was on for Pramac Racing’s Johann Zarco and for Monster Energy Yamaha’s Fabio Quartararo, as there has not been a French winner at the Le Mans Bugatti Grand Prix Circuit, in the premier class.

Ducati Lenovo’s Jack Miller blasted into the lead by the first corner, as Monster Energy Yamaha’s Maverick Viñales and Quartararo slotted into 2nd and 3rd respectively, whilst championship leader, Francesco Bagnaia languished in 20th. During the second lap Repsol Honda’s Pol Espargaro had a near highside, forcing Petronas Yamaha duo, Valentino Rossi and Franco Morbidelli to take evasive action. Morbidelli crashed and Rossi dropped down the order to 13th.

As conditions began to change, Viñales took the lead, as his teammate Quartararo set the fastest lap. The rain began to fall at the beginning of lap 4, it then became a matter of who would pit for their wet weather machine first. The stricken Morbidelli, who has been suffering with a knee injury this weekend, pushed his crashed Petronas Yamaha back to his pit box, swapped bikes and set about chasing down some all-important championship points.

By lap 6, all riders had taken the dive down pitlane for their bike swap.  As Quartararo approached the Monster Energy Yamaha garage, he entered the wrong pit area, meaning race direction would have to investigate.

As the riders embarked on the 2nd part of the race, Team Suzuki ECSTAR duo, Alex Rins and Joan Mir fell victim to the treacherous conditions. Rins managed to rejoin the race in last position, leaving himself a lot of work to do to secure points, whilst Mir trudged back to the pits: the #FrenchGP will certainly be one to forget for the reigning World Champion.

Disaster struck for the Ducati Lenovo team, as Race Direction handed a double long lap penalty to both Miller and Bagnaia, for speeding on pitlane entry – Miller joked after the race that he’s used to getting speeding tickets in France, but this one he would have preferred not to get!

As Marc Marquez took the lead after his bike swap on lap 6, it appeared he was more than comfortable at the head of the field, setting the pace for Quartararo and Miller to chase him down. Unfortunately, it wasn’t to be for the Repsol Honda man, as he crashed out of the lead on lap 8, he was uninjured and re-joined the race.

By lap 12, Miller had bridged the gap to Quartararo, as they began to battle.  Race Direction declared that Quartararo would have to complete a long lap penalty for his bike swap infraction. Aprilia Racing Team Gresini’s Lorenzo Savadori, who had impressed throughout yesterday’s tricky qualifying sessions, was struck down by a mechanical problem on lap 13, as Red Bull KTM Factory Racing’s Miguel Oliveira crashed out on the same lap.

Team Suzuki ECSTAR’s Rins’ run of bad luck only continued as he crashed out of the race for the second and final time during lap 14.

On lap 15, as Miller led comfortably, Quartararo remained in 2nd, as Zarco chased him down. The LCR Honda Team battled for 4th, whilst a resurgent Rossi lay 9th. Top Rookie at the midpoint of the race was SKY VR46 Esponsorama Racing’s Luca Marini, who was 12th.

Aprilia Racing Team Gresini’s Aleix Espargaro fell victim to a mechanical issue, putting an end to a miserable #FrenchGP for Aprilia. As the sun broke through the clouds, the Le Mans Bugatti Grand Prix Circuit dried out very quickly, making it possible that MotoGP field may need to pit for slicks! As M. Marquez battled through the field, recovering from his earlier crash, his #FrenchGP came to an end as he crashed out for a second time on lap 18.

With 6 laps to go, Zarco attacked Quartararo for 2nd, and set his sights on victory at his home Grand Prix. As Zarco was posting lap times around 1 second faster than Miller, the comfortable 7.3s lead began to dwindle quickly. Miller responded, maintaining the gap at around 4.5s. As Miller began the final lap of the #FrenchGP, he managed to keep a 3.9s gap to Zarco to take back-to-back wins for the first time in his MotoGP career. This makes Miller the first Australian to take back-to-back wins since Casey Stoner in 2012.

Top Rookie of the #FrenchGP was SKY VR46 Esponsorama Racing’s Marini, who finished 12th. A special mention goes to Tech 3 KTM Factory Racing duo Danilo Petrucci, who finished 5th and Iker Lecuona who finished 9th, a fantastic result for both riders. Tito Rabat who has been replacing the injured Jorge Martín for Pramac Racing finished 15th, taking the final championship point scoring position, before he returns to his duties in the World Superbike Championship. 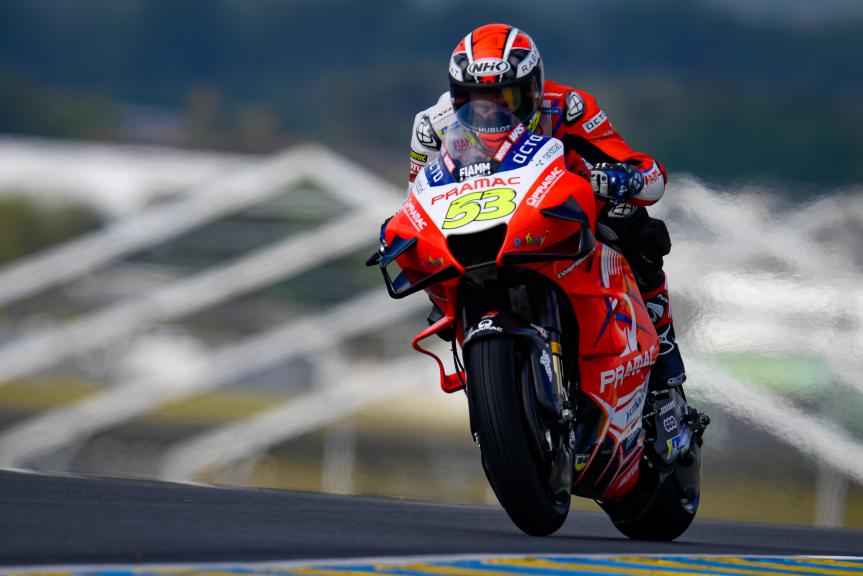 Miller has well and truly proven his doubters wrong, as we head to the sixth round of the MotoGP World Championship at the Autodromo del Mugello – the home of Ducati. With just 16 points covering the top 4 in the championship, Quartararo will lead into the #ItalianGP, with Bagnaia, Zarco and Miller hot on his heels. Can Miller keep up his winning ways; will Zarco finally secure his maiden MotoGP victory, or can Yamaha steal glory in Ducati’s backyard? We’ll see you on May 28th to find out as FP1 kicks off the #ItalianGP.